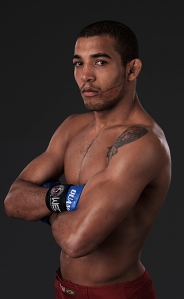 1. Jose Aldo – 4-0 – By far the fighter of the year.  Aldo came out of nowhere to cement his place as the best 145 lbers in the world and a top pound for pound fighter in the world.  Who can beat Jose Aldo?  He looked like a mini-Anderson Silva against Mike Brown.  His speed and power are deadly.  By the way, he is rumored to have a very dangerous ground game.

2. Lyoto Machida – 3-0 –Machida may be number one if it was not for the controversy of the last fight.  Coming into 2009 Machida was harshly criticized.  Critics called him boring.  He answered those critics.  A knockout win over Thiago Silva in January earned him the title shot against Rashad Evans.  At UFC 98 Machida destroyed Evans and won the title.  He then successfully (and controversially) defended his title against Shogun Rua at UFC 104.  He became the first UFC light heavyweight champion to defend his belt since Rampage Jackson defeated Dan Henderson at UFC 75.

3. Mauricio “Shogun” Rua – 2-1- A great year for Shogun.  He looked fair against Mark Coleman.  He looked good in his KO win over Liddell.  He looked spectacular against Machida in a loss.  He looked so good that Dana White has granted him an immediate title re-match.  May 1, 2010 will settle the score.  As for now Shogun is the #1.5 LHW fighter in the world.

4. Cain Velasquez – 3-0 –Cain finished the year with wins over Cheick Kongo and Ben Rothwell.  Cain will get a shot at Big Nog and a win over Nogueira will get him either a title shot or interim title shot.

5. B.J. Penn -2-1 – I reserved this place for the winner of the Penn vs. Sanchez fight.  I know B.J. Penn lost to GSP, but he looked spectacular against Kenny Florian and Diego Sanchez.  In 2009 B.J. Penn cemented his spot as the greatest lightweight of all time and has in essence cleaned out the UFC lightweight division.  A move to welterweight in 2010 makes sense.

6. Georges St. Pierre – 2-0 – Some injuries forced him not to fight in the last half of 2009, but St. Pierre notched wins over B.J. Penn and Thiago Alves at the two biggest UFC events of the year.  A third win would have put him higher in the rankings.

7. Nate Marquardt – 2-0 – He made his case for a title shot.  He posted big wins over Wilson Gouveia and Demian Maia. A win over Chael Sonnen in February will get Marquardt another shot at Anderson Silva.

9. Hector Lombard – 5-0 – Lombard proved to be an elite fighter running through Bellator’s middleweight tourney.  He still needs to fight elite competition to prove himself, but the judoka looks like a for real guy who came out in 2009.

10. Fedor Emelianenko – 2-0 – Fedor came out of hiding to book good wins over Andrei Arlovski and Brett Rogers.  He is still the best heavyweight in the world.